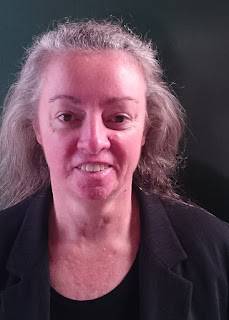 Catherine Evans is a city-born throwback to country genes. After completing an Environmental Biology degree, she desperately needed to move to the country. A job in agriculture was the perfect escape - even if left field! After spending eighteen years in agricultural research and gaining a Masters degree in Agriculture, Cath has a passion for rural life.

Now living on the south coast of NSW where she loves the ocean, a large part of her heart belongs across the mountain ranges in the red dust.

Why a 'throwback'? My family history in brief.
Being called a 'throwback' came from my Mum early in my life. I didn't fit the city living, wasn't very good at being a 'girl'.

Mum's mother's father (my great grandfather) was off the land at Howlong, NSW (near the Victorian border). As a young man, and not the eldest son, he broke his collarbone and was considered not useful on the farm. He packed himself off to Sydney and worked for the PMG (Post Master General), where he met my great grandmother and they stayed in Sydney raising their family. Grandma and Mum both remembered visits to Howlong but they never lived there.

My Grandma married a Bank Manager, Pop.They lived in Sydney while he was training and then during the war when he served. Then they lived in Finley and Lismore, before returning to Sydney close to retirement.

When Mum left school in Lismore, she moved to Sydney. She met my Dad, who grew up in inner city and had no established ties to the country (however, there were relations living at Come-By-Chance, up near Walgett). Mum and Dad lived in the suburbs of Sydney and raised four girls (I'm the eldest). For our annual holiday we drove an hour south or north, no more, and nowhere unfamiliar! My Dad would hire a boat and he and I fished daily.

When I was a kid I was animal mad, and desperately wanted a horse. We lived next to a school and I  approached the school principal about exchanging horse rides for agistment (it was a big playground!). Sadly, she colluded with Mum and I wasn't allowed. I knew nothing about horses but I read books, I had a dog, how hard could it be? As a 9 year old, I was pretty idealistic.

I devoured books. Any books. But horse books were my favourite. When I got older, Mum produced her copies of Mary Grant Bruce's Billabong series. I devoured and loved them. I wanted to be like Wally, the city boy who falls in love with the farming girl and runs the property with her. That was my dream.

High school was incredible. Although I was a day student, there were boarders from the country. I made friends with many of them, but no one had the Billabong property, and no one had brothers. I was shattered! :)

I went to uni and did Environmental Biology. By now I wanted to live in the country and I didn't care so much for properties, I just wanted out of the city. When I finished, I applied for every job I saw that was outside Sydney - even one at Groote Eylandt! I had no clue, just a burning need to get out of Sydney. I applied for a job in Wagga Wagga, in agricultural research with soils. I knew something about soil from my study, but nothing about agriculture. Didn't worry me! I got an interview (one of the few I had - I was so fresh out of uni). I drove to Wagga Wagga (having never driven so far in my life. My car needed oil along the way, as well as fuel. It had probably never driven so far in its life either!). I clicked with one guy on the panel, the other two people scared me. I figured I didn't get the job. It took a long time, but a few months later I was moving to Wagga Wagga, going to get my horse, going to live in the country and going to marry a boy from the bush (just my luck he didn't own a property!).

When the extended family were aghast, Mum would shrug and say, "She's a throwback to another time." I can live with that :)

I grew up in the city and couldn't wait to leave. My dream was to 'move to the country and own a horse'. Moving to the country brought me so much joy - but I made a lot of mistakes. There was just so much I didn't know.

I've been on this writing journey since 2008 when I needed a new career after being ill with Ross River Fever and Glandular Fever.